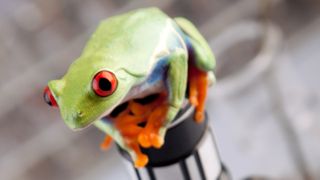 The future of robotics could be surprisingly squishy. A team of researchers from the University of Vermont have successfully designed and built ‘living’ robots using different types of cells scraped from frogs.

Many ofthe robots we saw at CES 2020 last weektook design cues from animals, but the frog-bots are quite different. AsThe Guardianexplains, these are tiny, artificially created life-forms, made to perform a particular task such as moving along or carrying a small payload.

Such tiny robots could ‘heal’ themselves when damaged, avoiding the need for difficult maintenance and repair, and when they’ve completed their job they can simply break down organically.

The team designed the organic robots using an evolutionary algorithm that generated thousands of random designs using combinations of heart cells (which are able to contract and relax spontaneously) and skin cells (which aren’t).

These designs were tested in a virtual environment to see how well they performed a particular task, such as moving forwards. Those that performed best were then used as a starting point for a generation of new designs, which were then tested again.

After the designs had evolved over 100 generations, the researchers chose a small sample to build in the lab using early-stage skin and heart cells harvested from African clawed frogs. When released into water (to keep them alive), some moved forwards, while others ‘swam’ in circles. The heart cells have enough energy to keep swimming for 7-10 days. For more details,see the full published paper.

“These are entirely new lifeforms,” said Michael Levin, director of the Allen Discovery Center at Tufts University in Medford, Massachusetts. “They have never before existed on Earth, They are living, programmable organisms.”

While the frog-bots are still at a very early stage in development, it’s possible that more complex versions could be used in the future for tasks like nano-surgery and cleaning up micro-plastics.

If Trump Can’t Bully Iran Into Backing Down, Things Could Get Scary Fast

People Are Sharing Their IRL Run-Ins With Tom Hanks And They Prove He’s The...